This magnetic, reusable iPad screen protector mimics the texture of drawing on paper.

Available to ship to the United States and Canada

The textured screen does a good job of simulating the feel of pencil on paper when using the Apple Pencil on my12.9 inch iPad. The magnetic attachment makes it easy to install and remove. On the downside, the textured screen significantly decreases screen contrast and colors - especially in brightly-lit rooms - degrading iPad uses when not sketching. The screen also tends to detach from the screen and stick to the keyboard when opening an iPad mounted in Apple's Magic Keyboard.

Gives me texture without having too worry about having it stuck all the time. Genius product for artists 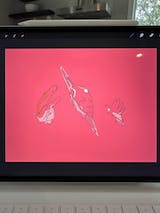 As far as the texture goes, it's perfect. I've tried other 'paper feel' protectors and personally this is my favorite. I work as a freelance illustrator and recently have been taking some classes on the side, so I can say this as someone using it constantly for both professional artwork and daily notetaking at college lectures.

The only reason I didn't give it 5 stars- it came with a small dent near the border of one of the magnets, so it actually isn't able to sit 100% flat. It wouldn't be the biggest issue if it was just a small bump, but the magnets aren't super strong so the protector doesn't always stay in place. If there wasn't the dent, I'm guessing the magnets wouldn't be an issue, since they truly aren't bad. It's just an unfortunate combination. Astropad has been quite consistent in the past things I've purchased, so I truly believe I just got unlucky this time around.

However, the other reason I felt like I couldn't give it 5 stars is because it's slightly too large for the average iPad case, so I currently can't even use it unless I take my case off. I have tried other cases and it's the same issue, so if possible I would recommend maybe decreasing the size ever so slightly, maybe 1-2mm at most (didn't measure it, just an estimate). It would make it much more compatible.

Overall, if these 2 things weren't an issue, I'd easily say I'd never go back to other types of protectors.

So far, I really like this. Previously, I was using a screen protector that was basically a big matte sticker. It was great but installation was always stressful because of tiny dust particles. This one was super easy to install. I was done in less than a minute. The only thing I wish was a little better was the little sticker that says "this side up". That sticker does not come off easily. But that is super minor.

A
Alexis
could be just a tad smaller!

This is a millimeter too big to fit the screen of my iPad Air with my case on! It doesn't quite fit under the case either! Of course I can pop off the case, which I can do when feeling fussy, but I do prefer the popped up angle when drawing. A sharp xacto knife and scissors are tempting me. I really really wanted this to work, as the glorious texture is exactly what I was missing from the e-drawing experience...

123
Your are successfully subscribed for email notifications.
✖

Notify me when available

We will send you a notification as soon as this product is available again.

Your email is requried